Pick Your Own: More Choice For Our Wedding Cake Customers

Pick-Your-Own is a way for you to create a 'four quarters' wheel for a cheese wedding cake. These are the wheels of cheese that are made by pushing quarter-shaped pieces of different cheeses together. It's a good idea because it means your cheese cake has more variety (and gets round the issue of having a massive amount of one cheese - from your big base layer).

So here's where they are on the site, and they'be been really popular since they came in. Most of them feature in the Cakebuilder, and we created three new wedding cakes that use the same idea: Wheel Of Four-tune, Four-Leaf Clover and Four-tissimo!

Now we've had a new idea. We've made a list of the cheeses that are one particular size - 25cm diameter (very common in cheese cakes for about 80 people up) - and set up a way for you to pick which four cheeses you want to make up your wheel. We call it Pick-your-Own.

How does this work?

Well, the menu for 'Pick-Your-Own' contains a number of different cheeses: just choose four you fancy the sound of, and add them, one at a time, to your basket. Any four can be pushed together to make a wheel of about 25cm across and 7cm high, weighing somewhere between 3.6kg and 4kg.

We'll trim the pieces so that they fit together reasonably well. It's not precision engineering ... but as the Swedish say, it'll be lagom: good enough! Anyway, if this sounds useful, take a look here. 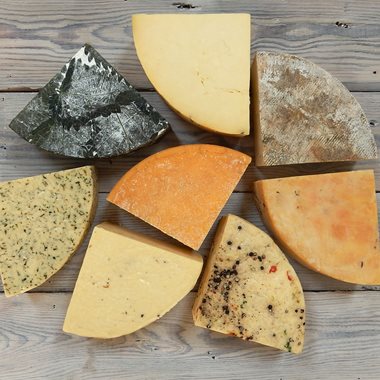 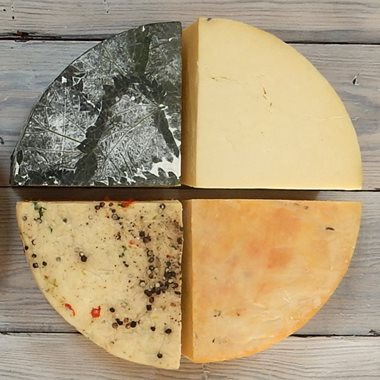 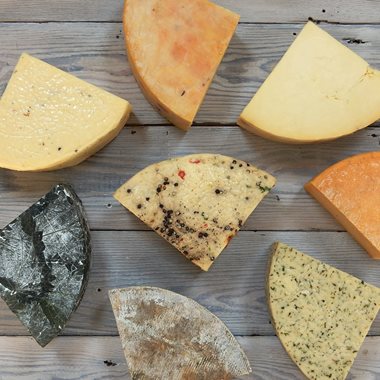