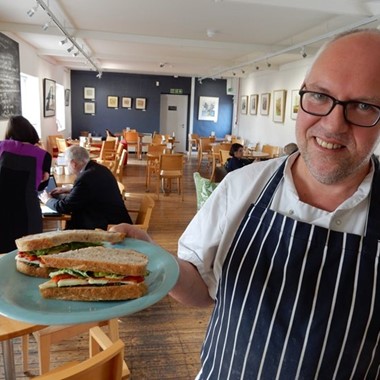 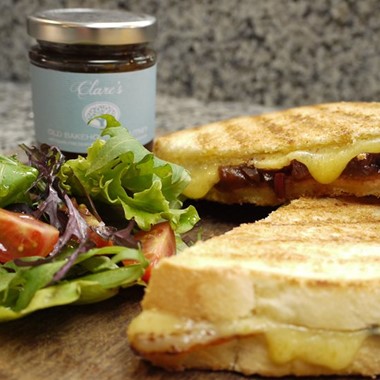 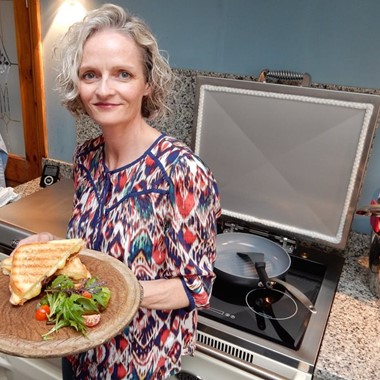 This week is British Sandwich Week, so we had the idea of asking four of our friends on the local food scene in Bovey Tracey to create a sandwich based around some of our cheese.

It almost started badly. When I rang Richard Quested, chef at Devon Guild of Craftsmen I immediately launched into a long and frankly rambling spiel about British Sandwich Week, cheese, The Cheese Shed, photos and an idea for a blog post. At the end, there was a silence. And then he said: "So what you're asking is, 'can I make a sandwich?'

Fortunately for me, Richard wasn't offended - far from it: he turned out to be someone who really doesn't underestimate the appeal of bread and cheese. So for us he took Fosseway Fleece, a classic clean-tasting ewes' milk cheese which has long been a favourite, and teamed it up with his own seeded focaccia and wild garlic pesto, roasted peppers, tomatoes and Little Gem lettuce. Fab. And surely this has to find its way onto Devon Guild's lunch menu?

Clare's our fantastic local preserves maker. Increasingly garlanded with awards and now - as Clare's Preserves - selling in Fortnum & Mason, she's going from strength to strength, and we have a number of her fantastic products on the site. She fancied something which would work with her Old Bakehouse Chutney, and something with melted cheese, and for me that immediately brought Ogleshield to mind. Her sandwich is a simple, classic combo - ham, Ogleshield and chutney - toasted in a pan on the stove top.

Along with Sally Thomas, Stephen runs the very successful Cafe Sixty Four which filled a huge gap in Bovey when it opened a few years back, and has been popular ever since. He wanted to do a version of something that's a firm favourite with his customers, so produced one of their brie, bacon, cranberry and rocket sandwiches  - using some of our top-of-the-range Sharpham cheese. And I now know exactly why that is so popular!

Jeremy's the keen-as-mustard proprietor of Wildmoor Delicatessen which is not so much a stone's throw from The Cheese Shed as ... right next door! In the year since he took over he's established himself as someone with a serious interest in food, and a particular passion for seeking out and supporting the best local producers. His sandwich naturally draws on the latter: so Eve - the beautiful brandy-washed and vine leaf-wrapped soft goat from Somerset - is matched with two items from much closer to home, Continental Crumbs's sourdough bread and The African Chef's Carrot & Ginger Relish. Just a touch of cress completes it. 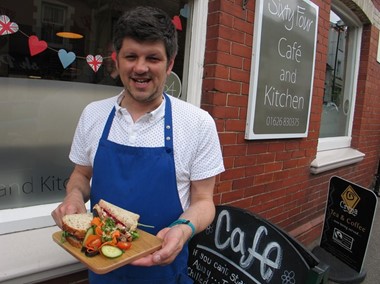 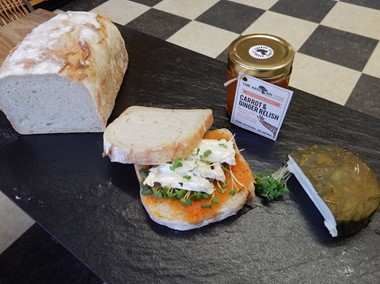 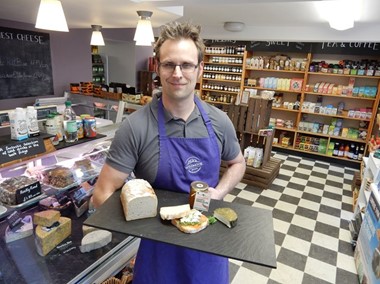