Anatomy Of A Classic: Four-tissimo! 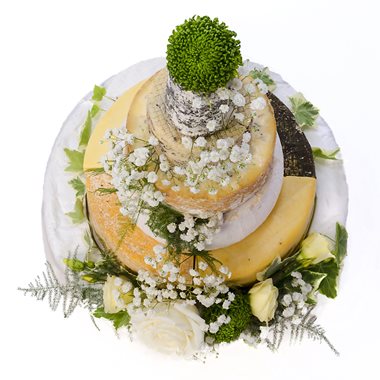 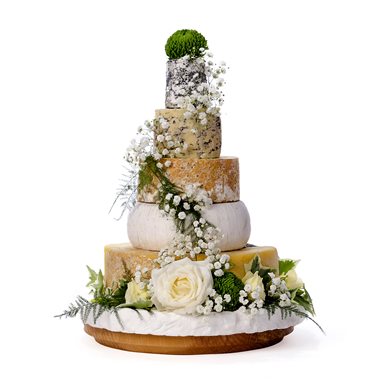 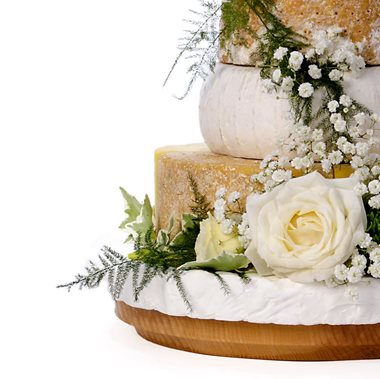 Well yes, it is a bit of a classic, if we say so ourselves! Four-tissimo has been very popular since we brought it in, quite a few years ago now. So why's it caught on?

One thing is the use of the 'classic four quarters' wheel - from which it takes its name. It's the second layer up. Early on we realised that one downside of the cheese wedding cake was that you end up getting a lot of whatever's at the bottom. And I mean a lot: a big cheese near the bottom of a cake might be 4 or even 6 kilos ... and of course that's all one thing.

A 'four quarters' wheel deals with that. As it happens, there are quite a few cheeses that are 10" (25cm) across ... so by selecting four of those, and with a bit of trimming-up, we can give you a 10" wheel of cheese which is actually four different cheeses - in this case, Quicke's Cheddar and Oak-Smoked Cheddar, Cornish Yarg and Smart's Double Gloucester. Result: more variety.

The base is a big French brie called Ma Cremière. We used to use a couple of Westcountry bries (Westcountry is our thing, after all!), but then ... one dairy closed down, whist the bries from the other started to be too soft to take the weight. So we looked across the channel and found this one ... which does he job very nicely.

Two more cheeses have changed from the original Four-tissimo, but in each case we've swapped in something as similar as possible. Sheeps' milk Washbourne (the white one in the middle) became hard to get ... so that's now Fosseway Fleece. For similar reasons, the ash-dusted soft goat Dorstone is now half a Driftwood. That just leaves the two beautifully contrasting blues, which are as they have always been: Cornish Blue and Colston Bassett Stilton.

Why has Four-tissimo been a success? It's a mixture of things, I think. There's all the above - the mix of cheeses. It feeds a hundred - which suits a lot of weddings. It gives you decent amounts of that 'core trio' - cheddar, blue and brie, but ... keeps it interesting by making it two cheddars and two blues. Add two classic, popular cheeses - Cornish Yarg and Smart's Double Gloucester - and throw in something unusual (but amazing - trust me!) - Fosseway Fleece. Top it all off with that attractive, mottled little goats' cheese, and - winner! - as one of my co-mongers likes to say.