Cheese At Christmas: The Westcountry has It All

We can’t put this off any longer. It’s time to tackle the key problem posed by the imminence of the Festive Season. No, not the traditional-or-artificial-tree debate, or whether you dare seat Auntie Vi next to Grandma (after last year). No, I’m talking about a subject which is, of course, far more important. I’m talking about cheese.

The thing is, there’s just too much to choose from: all the traditional cheeses from home and abroad, plus a stack of great new British offerings. But here’s a way you can help yourself: go local with a Westcountry cheeseboard. Because stunning examples of all the main cheese types are made right here on your doorstep. Now, at The Cheese Shed we work hard to tell people about our great regional cheeses, and even sell them a kilo or two. But we find that even locals aren’t always aware of the range and quality on offer. So here is our guide to creating a beautiful Westcountry Christmas cheeseboard.

Following the example of Julie Andrews, we’ll start at the very beginning ... by talking cheddar. It’s the West’s great contribution to world cheeses, and right on our doorstep is one of its premier makers, Mary Quicke of Newton St Cyres. Quicke’s Cheddar has rightly won more awards than you can shake a stick at, and is available in strengths to suit everyone, from Mild right up to the 24-month matured Vintage. This is Top Cheddar to be sure. Incidentally, can anyone tell me why there wasn’t any cheese in Maria’s list of her Favourite Things?

You’ll certainly want a brie, and Devon provides another winner here, in the form of Sharpham. Pioneers of brie-style ‘mould-ripened’ cheeses in this country, the Sharpham estate’s eponymous cheese is a superb example, but you could also look at the beautiful organic Bath Soft Cheese, produced in a 300g square or a 650g round (when it’s known as Kelston Park).

Another type of cheese associated with France is the family known as the ‘washed rinds’. They tend to have a springy, semis-ft texture, a sticky rind, and are - ahem - pungent (ok, let’s be honest, we’re talking about the smells-like-old-socks cheeses). It isn’t so long ago that very little of this cheese was made here, but now there’s a whole clutch of terrific examples. Just from Cornwall alone, you could try Sue Proudfoot’s Keltic Gold, or the softer Helford White.

You might want a lighter - perhaps a sweeter - hard cheese than cheddar, in which case you could consider the modern classic that is nettle-wrapped Cornish Yarg, or Curworthy, made by Rachel Stephens in north Devon. Rachel also helps us with another category of cheeses, those where some extra flavouring is used. Her Meldon (with mustard and ale) has been around for years, but recent arrivals Simply Cumin and Dartmoor Chilli have been a great success with The Cheese Shed’s customers.

Of course there is more to milk than cows’ milk, so a quick word about cheeses made from the milk of sheep and goats is in order. Goats’ cheese is increasingly popular in spite of what, to my mind, is a rather bizarre lingering prejudice about it tasting ‘goaty’. For the enlightened, however, there are numerous terrific cheeses to be had, incuding Gunstone (hard) and White Nancy (soft). Sheeps’ milk cheeses are harder to find, but their number includes one of my top favourites, the hard, dry Millstone, made near Shepton Mallet.

But what’s that lumbering towards us? Ah yes, the proverbial elephant in the room. You know, the thing that’s blindingly obvious but no-one dares to mention? And this pachyderm is distinctly Stilton-shaped. Because you have to have Stilton at Christmas, don’t you? Well, no! Not when there’s Devon’s Ticklemore Dairy turning out some of the best blue cheeses you’ll find anywhere (like the Roquefort-esque Beenleigh Blue), not when there’s Cornish Blue, a former Supreme Champion at the World Cheese Awards, and not when there’s the Westcountry’s own tradional blue - Dorset Blue Vinny. Go on! Be brave. Just try any of these magnificent blues. Because I promise that if you do, Stilton suddenly won’t seem quite so essential.

So that's the Westcountry cheeseboard all sorted for Christmas. There is, of course, a very easy way to get this all sorted ... 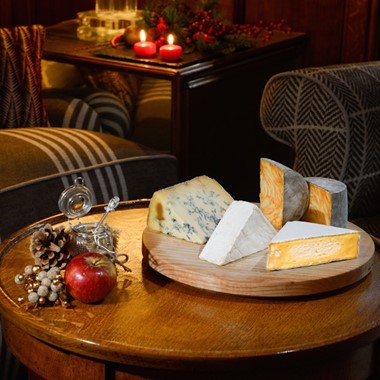 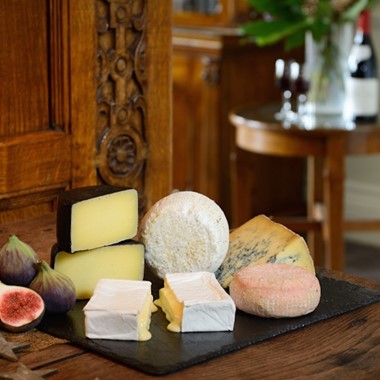 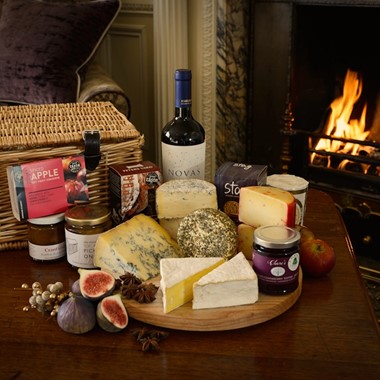