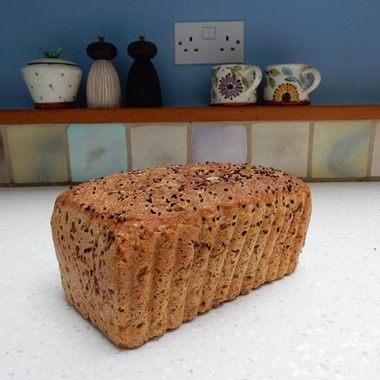 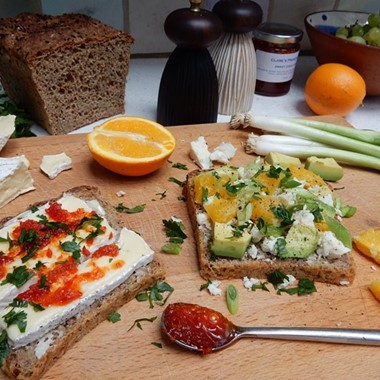 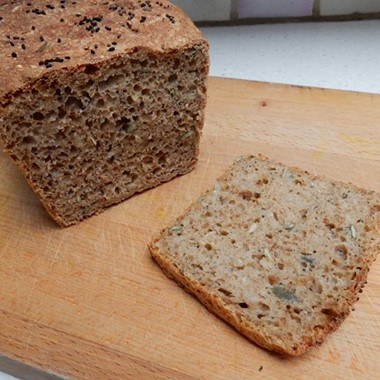 Bread and cheese is such a simple, classic combination, and in our house we make a very particular type of loaf to go with our cheese - and everything else. Because it's a type of bread that has rather dropped out of sight, today I want to tell you about it.

The story goes back to the early 1990s when I had a neighbour called Lottie. She used to make this amazing bread - quite unlike anything I'd had before. It was wholemeal but quite airy - not at all solid, as people expect wholemeal bread to be; the texture was unusual ... no crumb structure ... but above all it just had a great flavour. I visited Lottie's house a lot.

What's the Big Thing about this bread? There's no kneading. You just mix it up, put it in the tin, let it rise and bake it. It's quick. It's simple. It's marvellous.

She taught me the recipe, and I've been making it ever since, which is about 25 years. Now, not only is this the quickest, easiest loaf you'll ever make, it's also beautiful, and ... well it's different. And of course it's great with cheese.

Lottie didn't call it a 'Grant loaf', but later on I was reading Elizabeth David's bread book, and there it was, under that name. And it turns out to have been the creation of one Doris Grant, who was very keen to improve the nation's eating habits. She came across this method by accident in the 1930s - it later became widely known through her very successful book, Your Daily Bread, published in 1944. She died in 2003, but you can read more about this remarkable woman here and here.

My impression, though, is that this way of making bread isn't widely known ... a great pity because, as I said, it's just so quick, easy and delicious. So what I say is: move over sourdough, make way for the Grant loaf.

Incidentally, this is great bread for trying out the Danish idea of 'smørrebrød' - or open sandwiches. The ones you can see here featured Godminster Brie with sweet chilli jam (left of pic) and Beenleigh Blue with avocado, orange and spring onions (on the right). Most delicious.

Here’s the basic method. You can vary it in all sorts of ways, which I’ll come to later, but for the moment let’s keep it simple.

Into a big mixing bowl goes your flour, then mix in the yeast and the seeds. Strictly speaking the seeds are optional but I must say I always-always-always have them in mine.

Dissolve the salt into your water, which should be nice and warm, then start adding water to the flour and mixing it in really well. Keep going until you have a sticky, claggy mixture. You’re looking for something pretty wet - something that would slowly fall off a spoon. If it looks like you could actually knead it that won’t do: add more water!

Grease or oil your tins really well and splodge the mixture in (no need to smooth it down - it’ll find its own shape as it rises). Leave the tins in a warm place to rise. This should take a couple of hours, by which time your mix should be right up at the top of the tins, or even slightly above. Don’t jump the gun here - try and let it do all the rising that it wants to do.

Move the tins carefully over and into the oven (try not to bang or bump them). After 35 minutes, take the loaves out of the tins (they should drop out easily) and knock them on the bottom with your knuckles. They should make a nice drum-like sound. If not, put them back into a slightly cooler oven upside-down for 5 or 10 minutes. Then pop them on a wire rack to cool.

Flour. You can vary the flour, but I would keep it fundamentally wholemeal. You can mix in flours that include other grains or seeds, and recently I’ve been making it with a quarter of rye flour. I wouldn’t go too far with rye though, or it’ll get very heavy.

Seeds etc. I also usually add small seeds on the top of the loaves. Black onion, mustard and caraway seeds are sprinkled on the top of the sticky dough. I've also started putting flax seeds into the mix. Chopped rosemary leaves from the garden are a favourite too.

Other additions. I think the original Grant recipe adds honey. Personally I don’t think this is essential but there are various other things I go through phases of adding - all of which get mixed into the warm water - olive oil, honey, molasses, malt. Basically, it’s a very flexible thing: you can do all sorts! 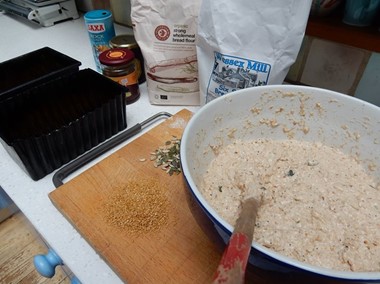 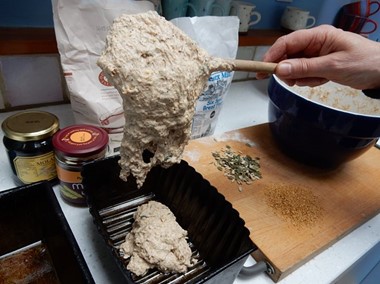 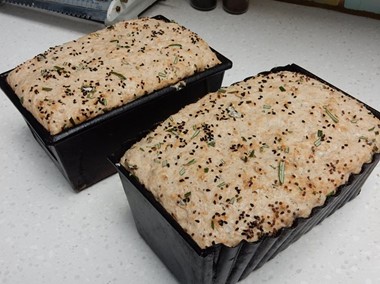