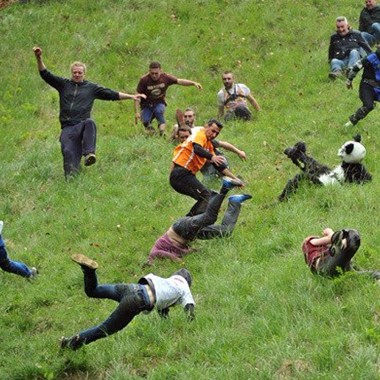 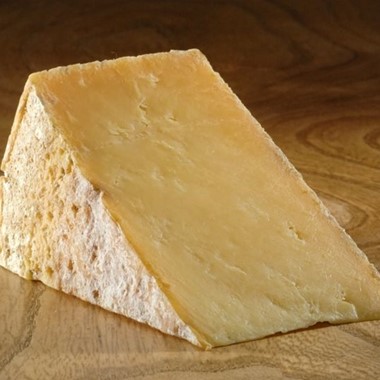 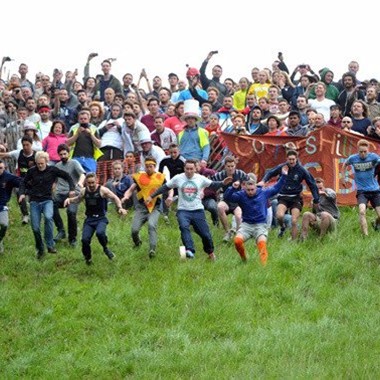 Monday's Bank Holiday saw this year's annual outbreak of Total And Utter Madness in Gloucestershire ... with the famous cheese rolling down Cooper's Hill. Every year many thousands turn up to see the competitors run, jump, slide, fall and roll (but mainly fall) down the dauntingly steep slope in pursuit of a speeding wheel of Smart's Double Gloucester weighing about three and a half kilos. One of the many mad things about this mad, mad spectacle is that no-one has a chance of catching the cheese ... but the winner is the first one to cross the line at the bottom.

It has to be said that whilst at The Cheese Shed we do like a bit of British eccentricity, given the choice between eating cheese and chasing it down a muddy field would tend to opt for the former. So let's turn our attention from the mayhem on Cooper's Hill to the cheese itself.

And Smart's Traditional Gloucester Cheese is a great story. Diana Smart had always been a Gloucestershire farmer, but didn't take up cheese making until she was in her 60s. That was when she bought a small dairy with its equipment and recipes, with the simple aim of continuing the tradition of really authentic double gloucester cheese. Now this was getting on for thirty years ago, when 'proper' cheese making was at a really low ebb. No-one could have foreseen the transformation in interest in artisan cheese that has happened since: Mrs Smart really was ahead of the game.

She was still making cheese every day when I first visited in 2008 - when she was in her 80s - bent double over the vat, reaching down into the developing curds to talk me through what was happening. A lovely lady, a true inspiration and - in our world - a bit of a legend.

She's retired now, but whilst as of two years ago they're in a new dairy (they call it a 'cheese house'), son Rod, wife Jo and longtime assistant Gary keep the dairy running on exactly the lines she established. And the new generation is coming in via Rod and Jo's son Will. Speaking to Rod recently what was very clear was that guarding the provenance and reputation of  their cheese was paramount. Diana Smart's ethos - authenticity, tradition, quality, all based around the good husbandy of a small dairy farm - is alive and well.

I love this story! It just seems to wrap up a lot of things that are really at the core of what we do. More power to the Smarts' elbows, and we look forward to supplying their cheese for many years to come.

And yes, should you be seized by the urge to chase a wheel of Smart's Double Gloucester down a hill, we won't try to stop you. We definitely won't stand in your way. It is, as they say, a free country! 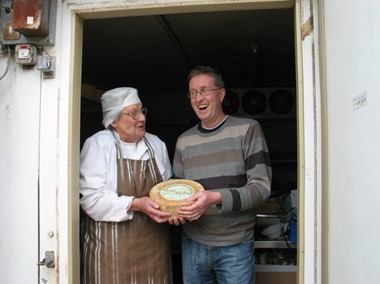 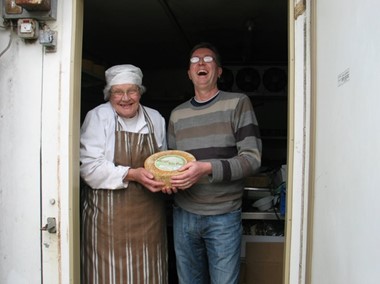 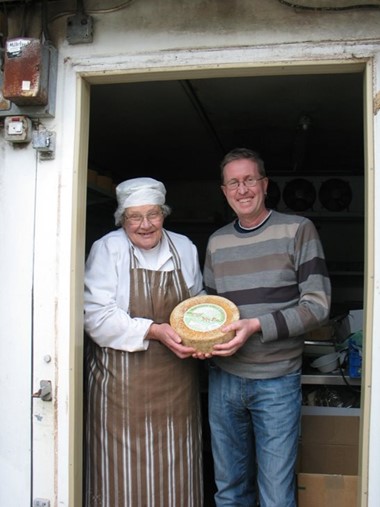