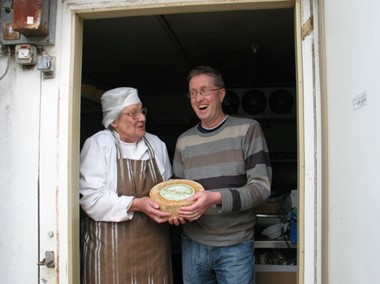 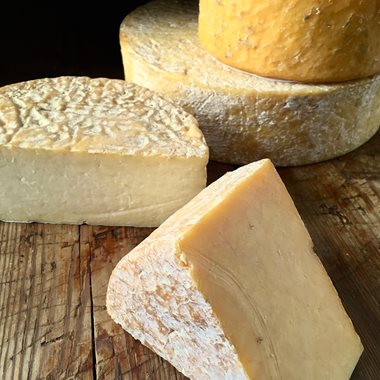 The Gloucester cheeses are part of the group we know as ‘territorials’ - British hard cheeses each of which is connected by its name to a particular area. Historical records have mentioned Gloucester cheese as far back as the late 1500s and many old farmhouses in the county have specially constructed cheese maturing rooms built into them. By a couple of hundred years later we are hearing about cheeses called ‘double’ and ‘single’ Gloucester, and it’s in the eighteenth century that Double Gloucester - the more well-known of the two - is at the peak of its fame.

So what do these two terms mean? Several things muddy the waters. Sometimes the milk from two milking was used; sometimes one. There’s also a school of thought that the difference was to do with physical size of cheeses, and also references to some cheeses being stacked (i.e ‘doubled up’) for maturing.

But set all that to one side. Because the consensus these days is that Double Gloucester is a cheese made with all full cream milk, whereas Single uses at least some skimmed milk.

There are, however, more differences than that, as Rod Smart, of Smart’s Traditional Gloucester Cheese, explained to me. For one thing, Double Gloucester is coloured with annatto - the ‘red’ (or rather, orange) vegetable dye - and so the two can always be told apart. Double Gloucester is matured longer - at least six months - and that, along with the effect of the cream on the cheese’s texture made it a firmer and more robust cheese that could stand being transported for sale in different markets. Single Gloucester, on the other hand, sold at a lower price, was made only when there was a surplus of milk, and sold locally.

The Gloucester cheeses - like many other traditional styles - came close to extinction in the twentieth century. Conservationist and cheese maker Charles Martell (he also makes Stinking Bishop) was instrumental in saving them when, in the 1970s, he decided to preserve the Old Gloucester cattle breed which would originally have been used, and began to make both cheeses. In the next decade, farmer Diana Smart - then in her 60s - got stuck into cheesemaking, determined to make the most traditional Gloucester cheeses she could. Diana passed away last year but son Rod and daughter-in-law Jo continue her work, and we are delighted to sell Smart’s Single Gloucester and Smart’s Double Gloucester today.

Incidentally, the Single Gloucester style is now a 'PDO' cheese. Protected Definition Of Origin. The status was gained in 2007 and it means that a cheese has to meet a specific list of caharacteristics in order to merit the name. It couldn't be done with Double Gloucester because - as with cheddar - it had long since been made in so many watered-down industrial versions that 'protection' had become impossible. Single Glouceser - which by virtue of having almost disappeared - was a different case. So if you buy that cheese today you can be assured that you're getting 'the real thing'.

Pictures: Left and right, a group of Smart's Double and Single Gloucester cheeses (the more orangey one is the double). Middle: Ian with Diana Smart in about 2008.