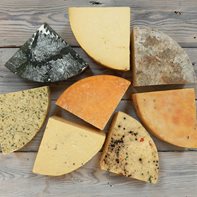 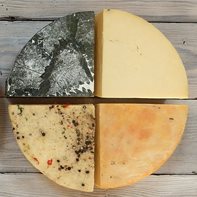 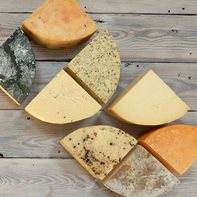 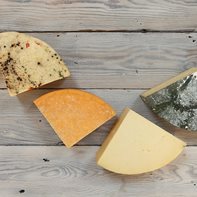 Pick-Your-Own is a way for you to create a 'four quarters' wheel for a cheese wedding cake. The menu contains a number of different cheeses: just choose four you fancy the sound of, and add them, one at a time, to your basket.

Any four of these can be pushed together to make a wheel of about 25cm across and 7cm high, weighing somewhere between 3.6kg and 4kg.

We'll trim the pieces so that they fit together reasonably well. It's not precision engineering ... but as the Swedish say, it'll be lagom: good enough!

To find out a little more about the cheeses in the list, take a look at the 'about' tab below. 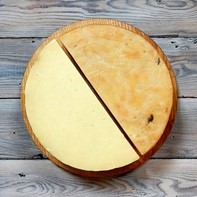 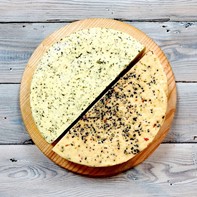 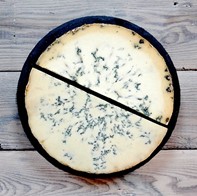 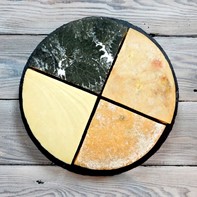 Quicke's Mature Cheddar: Classic traditional cheddar hand-made in open vats, clothbound and matured on wooden shelves. If you like your cheddar tradional this is the one

Somerset Herb, Garlic & Cider: All these three 'added-flavour' cheddars are made by Phil Rainbow of the Somerset Cheese Company up near Ditcheat. In each case the mature cheese is re-milled and the flavouring is added before it goes into moulds to recover its shape. This one has ... herbs, garlic & cider!

Somerset Chilli: As above but here the extra ingredients are chopped chillies and crushed peppercorns.

Truffler: Again - made by the same people at the same place, but this time with chooped Italian truffles and truffle oil.

Duckett's Caerphilly: Not all Caerphilly is (or was) made in Wales ... there's quite a tradition of it in Somerset, including this one (winner of 'best teriritiorial' in the 2018 British Cheese Awards).

Hawe's Wensleydale: Yorkshire Wensleydale is creamy, crumbly and full of flavour, made to a time-honoured recipe, using Wensleydale milk from local family farms. The cheese has been made in Hawes since 1897.

Fosseway Fleece: A hard ewes' milk cheese with cheddar-esque texture, made in Somerset. Not a household name but has been hugely popular with our customers since The Cheese Shed began in 2006.

Which are the stronger ones?

Which are the milder ones?