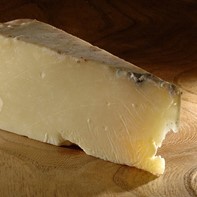 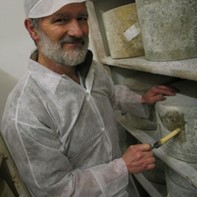 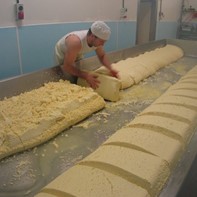 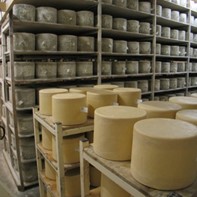 Matured in cloth for over 12 months, Keen's use only milk from their own dairy herd, with the untreated milk being used within a day of milking. Only about 130 cheeses are made per week.

Keen's, Montgomery's and Westcombe created one of the first UK Slow Food Presidia - for 'Artisan Somerset Cheddar'. Part of the Slow Food movement, its aim is to raise awareness of the special quality of traditional cheddar made using local raw milk and crafted by hand.

Cheddar from any of these makers represents the cheese at its most traditional, and at its best. 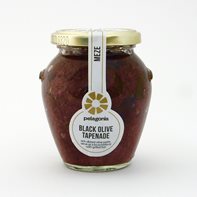 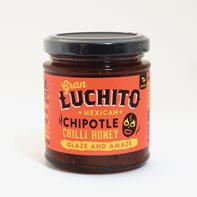 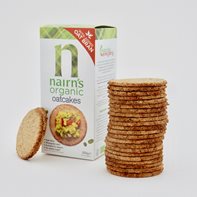 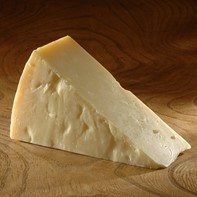 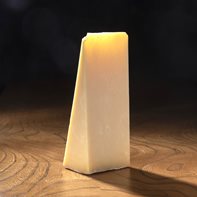 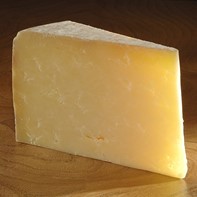 Walking through the big maturing room, packed from floor to ceiling with 25 kilo cheeses, it's hard to believe that 30 years ago the Keen family might have thrown in the towel. Pasteurised factory cheese was on every side... “no one's making unpasteurised cheddar any more" seemed to be the consensus... and the options seemed to be either give in (and pasteurise)... or give up.

The family had been making cheese at Moorhayes Farm near Wincanton since 1899, so this was a truly depressing prospect. But then, brothers George (pictured) and Stephen met Randolph Hodgson of Neal's Yard Dairy. Hodgson (a key figure, along with James Aldridge) in the artisan cheese revival, encouraged them to identify what was unique about their product, and to have faith in it. In retrospect, this advice was spot on. What they needed to do was let the public know about Keen's Cheddar and its distinctive qualities. The problem was that people just thought that cheddar was, well, just cheddar. There was an educational job to be done.

Out of this grew the idea for the Slow Food Presidium for Artisan Somerset Cheddar. Slow Food - originally from Italy - is the international movement dedicated to the

pleasures of food and the authenticity of the best artisan produce. Slow Food brings together gastronomy, green thinking, biodiversity and politics, but preservation of traditional foods is at its core. A 'Presidium' identifies and protects the key techniques involved in an important artisan product - in this case, the ultra-traditional cheddar made by just three Somerset dairies: Keen's, Westcombe and Montgomery's.

So what makes Artisan Somerset Cheddar different? Well, it has to be made in Somerset, with unpasteurised (or 'raw') milk from the farm's own cows. The cheese is made in open vats, using traditional starters (the bacteria which start the milk's transformation) are used, and calf rennet. Then, the 'cheddaring' process itself has to be used. You can see James Keen doing this in the photo: stacking the curd in blocks, turning, cutting and re-stacking - this is key to the cheese's eventual texture. Finally, the cheeses are cloth bound and matured on wooden shelves for at least 11 months.

Today George and Stephen have been joined by their sons (Nicholas and James respectively). The ethos at Moorhayes Farm is simple: "We just make cheddar how our grandparents made it".