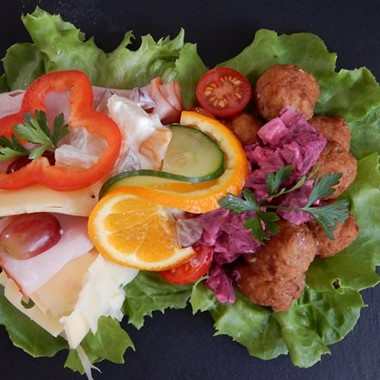 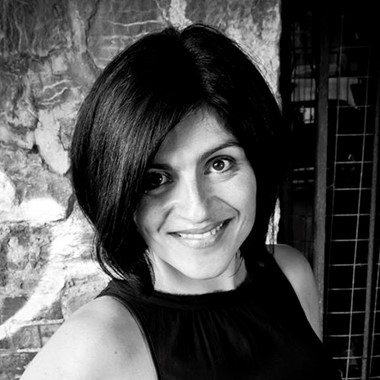 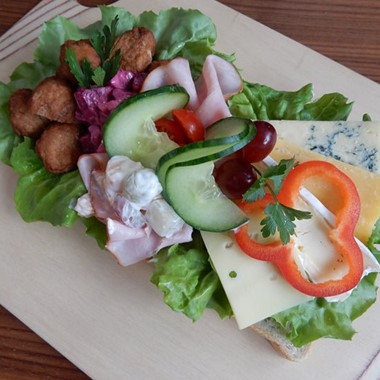 In our pursuit of new and different things to do with cheese, this week I turned to my old friend Annika Skoogh for help. Annika is from Sweden but has lived in the UK for 17 years, and I met her when the band I played in at the time - Ellingtonia - was looking for a new singer. We specialised in Duke Ellington's music and needed someone who could do justice to those great songs - Annika turned out to be just that person and we performed together for the next few years.* That's us in the photo below - playing in Exeter Cathedral. These days Annika's performing all the time in her own right, and more and more people are finding out what I've known for years - this is a fabulous jazz singer.

But back to food. As a great enthusiast for her country and its food, I asked Annika to give me a lesson on how to make Scandinavian open sandwiches (in Sweden, smörgås; in Denmark, smørrebrød).

We’re going to look at two versions of the same idea. Smörgås (pron. smer-gos) is a square or round open sandwich, while Landgång (pron. land-gong) is long - sometimes very long - with a variety of different toppings as you move from one end to the other. Annika said: “The toppings and fillings are endless - ranging from anything to pickled herring, gravadlax to meatballs, but I decided to use more traditional and classic toppings and garnishes that I grew up with as a child. I'm sure the variations are endless these days but the traditional prawn or meatball versions still very much dominate in cafes and homes all over Sweden.”

* Music trivia moment: Elingtonia's encore was a great number called Nothin' But The Blues ... so when The Cheese Shed created an all-blue cheese gift box there was really only one thing I could call it.

Bread. In Sweden they use various rye breads and (for smörgås) a round white teacake - 'tekaka' - but we used Kelderman german-style rye bread and a plain sliced white loaf.

Salted butter (room temperature).
Lettuce (get one with a curly leaf - washed and dried)
Swedish meatballs (try Sainsburys!)
Prawns (in shells - these need to be the ones that you peel at home)
Smoked ham slices (Annika suggests Brunswick - again from Sainsburys)
Cheese. We used Keltic Gold and Cornish Gouda for one landgång (photo top left) and Cornish Gouda, Smart’s Double Goucester, Sharpham Brie and Dorset Blue Vinny for another (see photo top right).
Boiled eggs

There are two particular salads Annika insisted we had to use for full authenticity. Fortunately, they’re both quite easy to make …

Rödbetsallad (beetroot salad). This is a mix of chopped pickled beetroot (in sweet vinegar) and apple - aim for 1cm cubes, and probably a bit more beetroot than apple. The dressing is a mix of mayonnaise and single cream to taste. Mimosa sallad uses tinned fruit cocktail (no, it really does). Drain this then add a mix of mayo and single cream as before. Ideally, cover these and leave them to chill overnight.

A landgång is meant to be long - so you’ll want to use several slices of buttered bread (we used two) placed edge to edge. Add the washed curly lettuce leaves - placed so that they hang over the edge of the bread.

Cut the red pepper across so it forms a pretty round pattern. Add this to the ham and cheese end, and garnish with parsley.

*A note on cheese. Ideally, Annika wanted to be able to roll the cheese slices up, but this proved a bit tricky with the Keltic Gold and Cornish Gouda I took along (more research needed!). Another way the cheese was used was with four contrasting cheeses set out in a fan shape at one end of the landgång (see photo top right).

This (see photo bottom right) is cheese-less … but a bit of a Swedish classic, so we had to include it (or so I was told).

Butter your bread and set out the overhanging lettuce leaves as before. Set out the peeled prawns at one side. Use an egg slicer - if you don't have one, cut the egg as thin as you can without breaking the yolk. Season the slices with salt and lay them next to the prawns.

Garnish with cucumber, lemon and orange slices as described before, then add mayonnaise in the middle - between the prawns and eggs. Garnish with fresh dill. 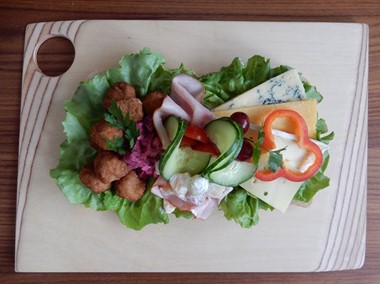 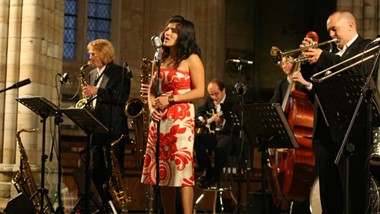 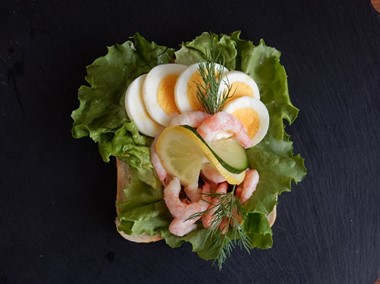