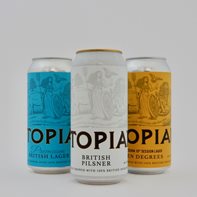 Utopian is a relatively new brewery based in mid-Devon. Their aim is to produce the best possible naturally-brewed lagers, using entirely home-ingedients.They say:

"By 'naturally brewed' we mean that we only consider adding things to the beer that will improve the quality of the beer and we do not add things to simple make the process easier or to produce the beer faster. We don’t add finings or enzymes for clarification we use cold conditioning and time.

Our beers contain just Water, Malt, Hops, Yeast and plenty of patience. And we think that’s just about as natural as it can be."